Researchers interested in investigating the effects of the most studied oral growth hormone secretagogue (GHS) will inevitably wonder how much MK-677 costs. This potent, orally-active GHS is a highly-sought research compound that is known for its abilities to improve body composition, bone health, sleep quality, and more.

In this guide, researchers will find a full overview of the costs associated with MK-677 administration, as well as an explanation of some of its benefits and side effects, a sample dosing protocol, and the best place to buy MK-677 online.

MK-677 (code name for ibutamoren) is an orally-active agonist of the ghrelin receptor that mimics ghrelin, an endogenous hormone known to increase hunger. MK-677 is classified as a growth hormone secretagogue because it stimulates the release of endogenous growth hormone [1].

MK-677 is mechanistically identical to the GH-releasing peptide GHRP-6, but is clearly distinguishable from GH-releasing hormone. It has a pronounced effect on GH levels, and exerts only modest effects on cortisol, prolactin, thyroxine, luteinizing hormone, and aldosterone [1].

In the United States, ibutamoren is classified as an Investigational New Drug and has yet to undergo evaluation by the Food and Drug Administration. The highest known development phase of MK-677 to date was a Lumos Pharma Phase II trial for somatropin deficiency, which was suspended in July 2021 and resumed in May 2022 [2].

While MK-677 is a research compound with no formally established therapeutic use, clinical studies have shown that it may offer several benefits when administered to research subjects. Here is our rundown of the top three MK-677 benefits reported in the literature to date.

Several clinical trials and studies have linked MK-677 to increased lean body mass production, given its ability to effectively increase levels of GH in subjects [3]. Importantly, MK-677 has not been linked to the same concerns as long-term, high-dose GH therapy, such as increased all-cause mortality in GH deficient children [4] and increased risk of harm in GH deficient adults [5].

One study found that MK-677 increased GH, IGF-I, and IGFBP-3 levels in GH deficient children after just seven days [6], suggesting that short-term MK-677 administration could be an alternative to somatropin therapy. Two other short-term studies have shown that MK-677 can impact body composition in test subjects. Murphy et al. found that a group of healthy, young test subjects experienced reduced diet-induced catabolism during a 14-day period of dieting [7], while a study by Svensson et al. found that MK-677 therapy led to a group of obese men gaining 3 kg more fat-free mass that research subjects in a placebo group [8].

Improved quality and duration of sleep

According to one study conducted in 1997, MK-677 improves the quality and duration of sleep when administered to research subjects at a dose of 25 mg per day. The study found that MK-677 therapy led to a 20 percent increase in rapid-eye-movement (REM) sleep and a 50 percent increase in Stage 4 sleep compared with placebo [9]. Based on these findings, further research into MK-677’s effect on sleep quality and duration is warranted.

MK-677 has a demonstrated ability to improve bone health in elderly test subjects according to results from a 1999 study by Murphy et al. [10]. The nine-week study found that MK-677 increased mean serum osteocalcin by 29.4% compared with a placebo and had a positive effect on bone resorption and formation. These findings suggest that further study along these lines could prove fruitful for researchers. 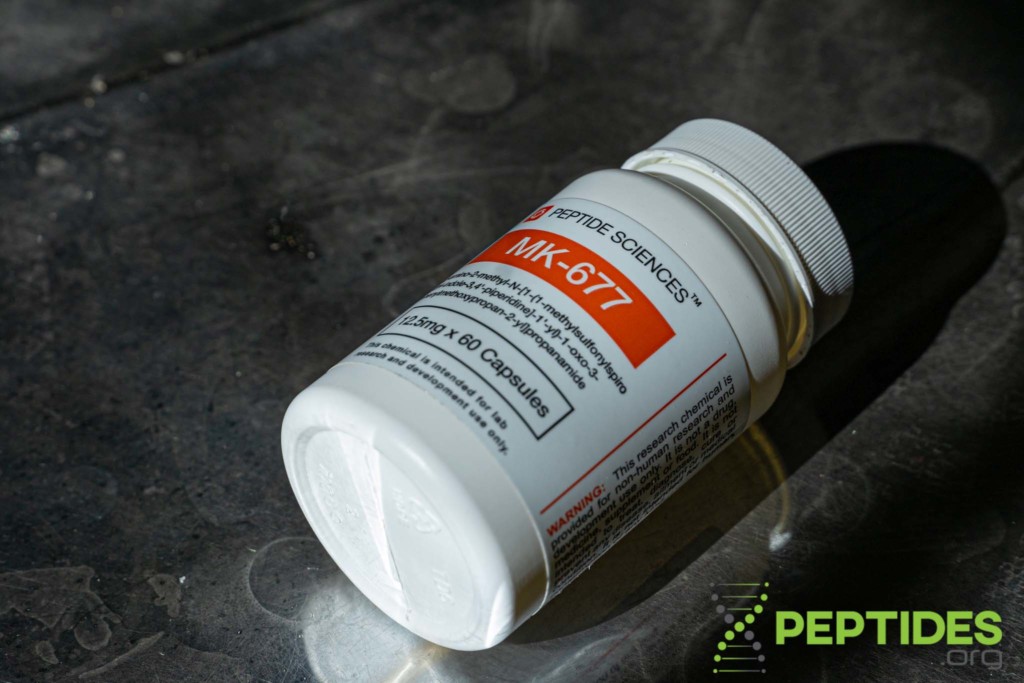 MK-677 Side Effects and Safety

MK-677 appears to be well-tolerated by test subjects and has not been linked to any severe adverse effects (AEs) [3]. The 1998 study by Murphy et al. concluded that MK-677 (25 mg) was “generally well tolerated and without clinically significant adverse experiences” [7]. However, as this study involved just eight healthy volunteers (ages 24-39 yr) and took place over two 14-day periods, its limited size and scope should be taken into consideration before drawing conclusions on the safety of MK-677.

MK-677 long-term safety, especially in terms of cancer incidence and mortality, is an area where further study is required [3]. A 24-week study conducted by Adunsky et al. in 2011 was suspended due to concerns that MK-677 could increase the risk of congestive heart failure (CHF) in elderly patients admitted for hip fracture [11]. The researchers concluded that MK-0677 had an unfavorable safety profile in that narrowly-defined patient population.

A year-long study involving 65 healthy yet elderly subjects found that MK-677 produced the following side effects [12]:

While these findings did not find that MK-677 caused any major side effects, there is a clear need to investigate the safety of long-term MK-677 use to better understand its effects on research subjects [2].

The cost of investigating the effects of MK-677 depends on a number of variables including the number of test subjects, dosage frequency and duration, and the cost of acquiring MK-677 from a peptide vendor. In this section, we outline how much MK-677 costs and how its price may affect the cost of running a trial or experiment.

The retail cost of MK-677 can vary considerably depending on a range of factors, including the country of production, purity, order volume, and shipping. Our preferred vendor, Peptide Sciences, sells bottles of 60 12.5mg MK-677 capsules for $125. Researchers can buy two bottles for $120 each and save 4%, or buy three bottles for $115 each and save 8%.

As a research chemical, MK-677 does not have a formally recommended or safe dose. However, researchers can look at existing data from the above-cited studies to see how it has been dosed in the past [7, 8, 9, 10, 11].

Based on the literature to date, researchers may refer to the following sample MK-677 protocol to study the compound’s effects on body composition:

Do You Need a Prescription to Buy MK-677 Online?

MK-677 is available exclusively to researchers as a reference material. It is not intended to be used for self-administration or in vivo testing. When purchasing from Peptide Sciences, no prescription is needed to buy MK-677 online.

Researchers looking to investigate the utility and safety of MK-677 may be curious to know where to buy MK-677 online. Our team has placed small orders with a range of vendors and assessed them according to the quality of MK-677 they provide, their prices, shipping times, customer service, and overall ease of use.

Based on our findings, the best place to buy MK-677 online is Peptide Sciences. This vendor offers industry-leading research chemicals at reasonable prices and has reliable shipping options for all orders. 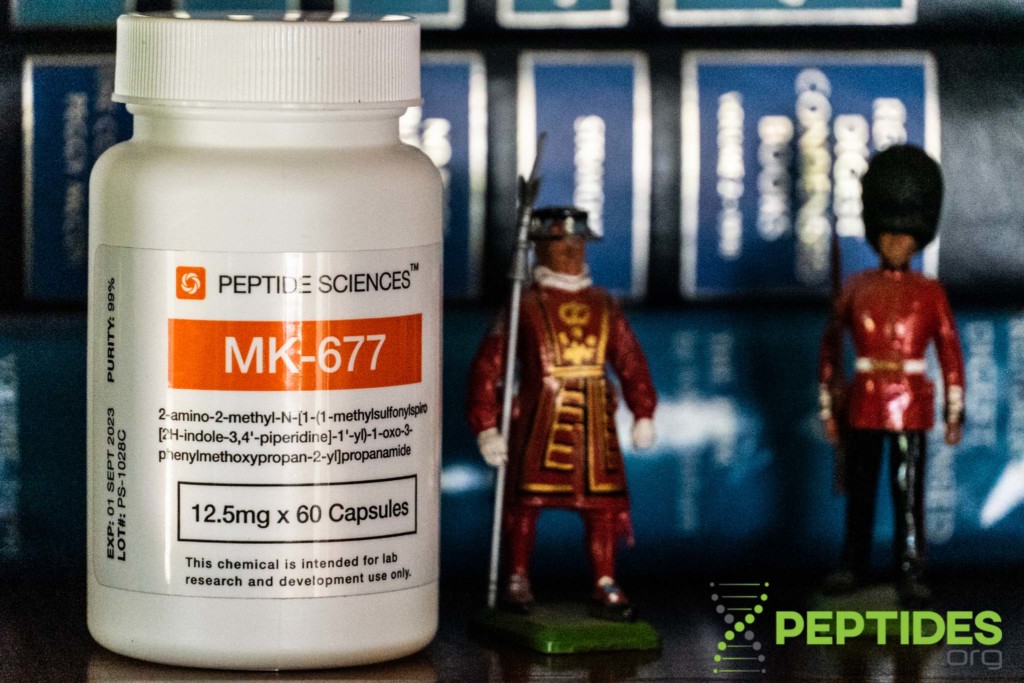 Here is why Peptide Sciences is the best place to legally order MK-677 online:

Researchers interested in further exploring MK-677 are highly advised to visit Peptide Sciences. In our experience, they are the only vendor that can reliably ship research-grade MK-677 at reasonable prices within a tight timeframe. We encountered zero issues with shipping or product quality and were extremely impressed.

We put together this guide to answer any questions that researchers may have regarding MK-677 costs. Our preferred vendor, Peptide Sciences, offers bottles of sixty 12.5mg MK-677 for $125 when purchased individually, with discounts available for bulk purchases. This makes the cost of investigating this GHS economical and should be good news for researchers looking to run long-term studies.

At this time, further MK-677 research is warranted across a variety of applications, including sleep quality and bone health. By referring to the extensive MK-677 literature to date, researchers should have little trouble designing a suitable study or calculating the costs involved. For further information on MK-677 or to place an order, visit Peptide Sciences today.