Researchers interested in investigating alternatives to HGH therapy may be curious about the similarities and differences between MK-677 vs. HGH.

Due to increased interest in MK-677 as an HGH alternative, our team has put together this guide to examine the two side by side. Those interested in conducting MK-677 research will find advice on where to order the compound online, as well as a summary of the side effects and safety concerns to note prior to conducting a study.

MK-677 (ibutamoren) is a ghrelin receptor agonist and growth hormone secretagogue, meaning it works to stimulate the secretion of endogenous human growth hormone (HGH). The compound has long been proposed as a treatment of GH deficiency, as it mimics the GH-stimulating effect of the digestive hormone ghrelin with minimal effect on sex or thyroid hormones, including prolactin, thyroxine, luteinizing hormone, and aldosterone [1].

MK-677 has been shown to be identical in function and mechanism to growth hormone-releasing peptide 6 (GHRP-6), the first GHRP ever synthesized and found to stimulate GH release to a significant extent [2].

Like GHRP-6, MK-677 acts on both the pituitary and the hypothalamus without affecting the normal negative feedback mechanisms in the GH pathway such as somatostatin and IGF-1. MK-677 was designed to have superior oral bioavailability and serum half-life compared with GHRP-6 [3].

At the time of writing, MK-677 is sold exclusively as a research chemical, and the United States Food and Drug Administration has classified the compound as an Investigational New Drug. MK-677 is currently being investigated in the Lumos Pharma Phase II trial for somatropin deficiency in GH-deficient children. This trial was put on clinical hold in July 2021 and resumed in May 2022 [4]. 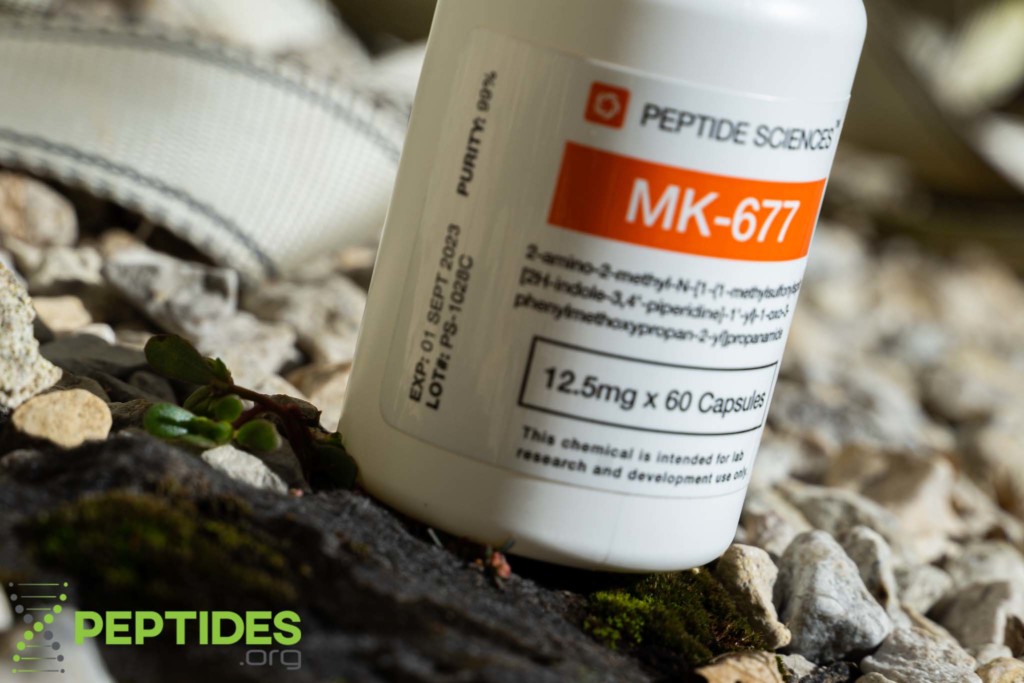 While MK-677 has no formally established therapeutic uses, it has been the subject of several studies and clinical trials and is currently being investigated as a treatment for somatropin deficiency [4]. Based on the literature to date, MK-677 is believed to offer the following benefits and advantages.

MK-677 vs. HGH: safety and ease of administration

Based on current research, MK-677 appears to have a better safety profile than HGH therapy (rhGH), which has been shown to increase the risk of mortality in GH-deficient children [5] and increase the risk of harm in GH deficient adults [6]. Furthermore, the pharmacokinetic properties of MK-677 make it suitable for once-daily oral administration, negating the need for frequent dosing and injectable route of administration [7].

Several studies have investigated MK-677’s effect on body composition in both GH-deficient and healthy test subjects. The bulk of research has focused on the compound’s effect on serum GH and IGF-1 secretion in GH-deficient adults and children. Investigation into its ability to treat somatropin deficiency in children is ongoing [4, 8].

MK-677 research in non-GH-deficient research subjects has shown that it can reverse diet-induced protein catabolism in healthy individuals [9] and increase levels of fat-free mass (FFM) in obese subjects [10].

There is strong evidence that MK-677 increases markers of bone turnover in elderly subjects and has a positive effect on bone resorption and formation.

According to results from three clinical studies lasting two to nine weeks and involving 187 elderly adults (65 years or older), those treated with MK-677 experienced an increase in mean serum osteocalcin of 29.4% compared with placebo. Subjects in the MK-677 group also experienced an increase in BSAP of 10.4% and mean urinary NTX excretion of 22.6%. Based on these elevated biochemical markers, MK-677 was determined to stimulate bone turnover in elderly subjects [11].

One small-scale study completed in 1997 found that research subjects experienced improved quality and duration of sleep following MK-677 administration. The participants, who were administered 25mg MK-677 daily, experienced a 50% increase in Stage 4 sleep and a 20% increase in REM (rapid eye movement) sleep [12]. The positive impact of MK-677 therapy on sleep suggests that further research in this area may be warranted.

Human growth hormone is a proteohormone naturally secreted by the anterior pituitary gland. It binds to the hGH receptor and stimulates the production of insulin-like growth factor I (IGF-I), which promotes longitudinal growth in children and adolescents and other crucial metabolic functions in adults [13].

When hGH entered clinical use in 1958, it was obtained from cadaveric pituitaries, but the use of recombinant hGH (rhGH) was approved in 1985. Recombinant hGH is an artificial product that has been manufactured to be nearly identical to naturally occurring HGH [13].

In most countries including the United States, HGH is available as a prescription drug with the generic name somatropin. Its use is largely restricted to patients with a GH deficiency in childhood, patients with documented hypopituitarism, and those with AIDS wasting syndrome or short bowel syndrome [3].

HGH therapy in individuals with GH deficiency has demonstrated numerous benefits, including [13]:

While these findings cannot be extrapolated to healthy test subjects, there is strong evidence that many athletes use GH in sports and that it has a strong effect on athletic performance [14].

For example, an 8-week randomized trial conducted in 2010 found that recreationally trained athletes who received 2mg/day of GH experienced a temporary increase in sprint capacity accompanied by a reduction in fat mass and an increase in lean body mass [15]. However, researchers cautioned that the sample size of the study was too small to draw meaningful conclusions about safety and that the purported benefits of GH, such as increased sprint capacity, were not maintained six weeks after GH was discontinued.

Researchers curious about MK-677 vs. HGH will note that these compounds are strikingly dissimilar. MK-677 derives from the GHRP-6 molecule, while synthetic somatropin is a human growth hormone analog. This section will highlight the similarities and differences between MK-677 and HGH.

Similarities between MK-677 vs. HGH

Both MK-677 and rhGH have been studied in GH deficient adults and children and shown to have a pronounced effect on [3]:

The main similarity between MK-677 and HGH is that they can both be used to ultimately raise GH and IGF-1 levels in test subjects, leading to the benefits we noted above, which include improved body composition, improved bone health, and enhanced sleep quality.

Differences between MK-677 vs. HGH

There are numerous differences between MK-677 vs. HGH that we highlight below.

rhGH is typically administered via subcutaneous injection while MK-677 is most often administered orally, thanks to its high oral bioavailability [3].

While a dose of rhGH has a shorter duration of action, typically <5 hours, MK-677 has a much longer half-life and elevates IGF-1 levels for up to 24 hours following a single dose [3, 13].

While exogenous HGH therapy directly raises serum GH concentrations, MK-677 works to induce the endogenous secretion of growth hormone. Injectable rhGH binds directly to GH receptors and stimulates the release of IGF-1, causing many peripheral effects such as stimulation of cell proliferation, survival and differentiation, and inhibition of apoptosis. By contrast, MK-677 works via the pituitary and hypothalamus and its action is specific to the GHS-R [3].

Recombinant GH has been far more extensively studied than MK-677 and significantly more is known about its benefits and side effects, especially over the long term. For instance, studies lasting up to six months have linked GH to increased lean body mass and reduced fat mass [16], increased exercise tolerance [17], and increased maximum oxygen uptake [18].

By comparison, far less is known about the effects of long-term MK-677 administration, especially its side effects and safety profile. One of the lengthiest MK-677 trials was a 24-week study involving elderly hip fracture patients [19], suggesting that additional long-term research involving MK-677 is required.

HGH (somatropin) in the United States is regulated as a prescription medication, available from pharmacies only by prescription from a licensed healthcare provider. Any individual with a condition that might require hGH therapy should consult their primary healthcare provider, who if appropriate, will establish an hGH dosing schedule and provide guidelines for self-administration.

By contrast, MK-677 is sold as a research chemical and it falls upon researchers to establish an appropriate MK-677 dosing protocol. Researchers may draw on data from the above-cited studies and trials to aid in designing future studies [8, 9, 10, 11, 12, 19].

Based on our review of the available literature, here is a sample MK-677 protocol with the objective of wound healing and regeneration:

How to Order Peptides Online

Researchers interested in exploring the benefits of MK-677 will be pleased to know that it is available online from our preferred vendor, Peptide Sciences.

Peptide Sciences lists MK-677 capsules for sale on its main website here. Each bottle contains 60 capsules and each capsule contains 12.5mg MK-677. The bottles cost $125 each if purchased individually, but researchers can save 8% if buying three units ($115 each).

Peptide Sciences gets every batch of MK-677 capsules tested by an independent lab and posts the lab results on its website. This lets researchers verify the purity of each batch before deciding whether to place an order.

Here is how to order MK-677 from this excellent vendor:

HGH therapy has been administered clinically since the late 1950s while MK-677 is still undergoing clinical trials, so far less is known about the latter compound’s side effects and safety. This limitation notwithstanding, we summarize the documented side effects of each below.

HGH side effects and safety

Side effects of doctor-supervised rhGH replacement therapy in children and adolescents include [20]:

MK-677 side effects and safety

MK-677 appears to be well-tolerated by test subjects, within the limits of the available research [3].

The following side effects were reported in a year-long MK-677 study involving 65 healthy yet elderly subjects [21]:

In a 24-week study involving elderly patients admitted for hip fracture, researchers concluded that MK-677 may increase the rate of congestive heart failure in that narrowly defined patient population [19]. Notwithstanding the study’s limitations, the findings underscore the need to investigate the safety of long-term MK-677 administration. Researchers curious about MK-677 vs. HGH will note that both compounds raise serum GH and IGF-1 concentrations in subjects. However, the two differ markedly in terms of their route of administration, duration of action, mechanism of action, and pharmacokinetics.

In summary, MK-677 is an oral GHS that has few known side effects, while recombinant hGH is an injectable prescription medication that has been linked to numerous short- and long-term side effects.

Researchers wishing to explore the benefits of MK-677 are highly advised to order from Peptide Sciences. This reputable vendor has a proven track record of supplying research-grade peptides to researchers worldwide.